Hi,
I do not see the difference in the genrated intilialization lines of the grid_count_int and the cell_size_int controls. But if I hit the keys [1] and [5] then one of the shows "51" the other shows "15". The cursor in the first case jumps abnormally to the left side of the entered "1" so the "5" comes in the place of tens. The second control is filled as I expect: the cursors is blinking on the right side of "1" so the digit five goes to the place of ones.

I have to carefully move the cursor by arrow keys to the right side of the "1" if I want to enter cell_size_int=15.

Would you be so kind to solve this enigma?

Both controls show "1" but the position of the cursor is oposite.
I have entered the first digit in both controls.PNG (1.14 KiB) Viewed 4258 times

The behavior is completely like right-to-left writing (like when typing Arabic letters), however numbers are left-to-right. Cyrillic letters (in your static texts) are also right-to-left (but you know that of course). And the ltr/rtl mode of one control does not affect the other controls.

What happens if you first type in a Cyrillic (or Latin) letter and then the numbers?
Regards Thomas Linder Puls
PDC
Top

The vpiCommonDialogs::getString(...) displays the Russian input from left to right as it ought to do.

I think that is the normal behavior for Russian users. The opposite serve for Hebrew and Arabic input, or https://en.wikipedia.org/wiki/Old_Hungarian_alphabet or the reinvented old Hungarian runa. 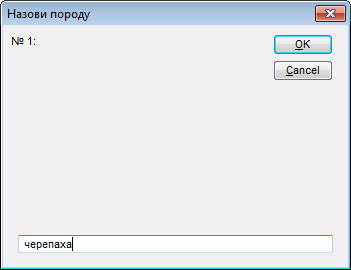 As mentioned the problematic control behaves as if it is in right-to-left mode; But normally the mode changes with each character and as soon as you type a left-to-right character the control should go into ltr mode (from that point). rlt/ltr problems have also been discussed in Problem in replaceAll predicate .

But all the mentioned characters are ltr characters, so the behavior is absolutely peculiar. I don't know why it happens and I have not encountered that problem before.
Regards Thomas Linder Puls
PDC
Top

Thank you Thomas, for your attention.
I could solve the problem by brute force.
1) I have duplicated the control having normal left to right filling.
2) I have given a new name to the generated duplication.
3) I have added to the new control the event handler for validation and click of the abnormal right to left filled control.
4) I have deleted the abnormal control.
5) I have replaced the name of the fact variable of the deleted control with the new name in the *.pro file belonging to the form.
TIA, Regards,
Frank Nagy
Top

I am glad your problem is solved. It will remain (most likely forever) a mystery why it happened.
Regards Thomas Linder Puls
PDC
Top
Post Reply
6 posts • Page 1 of 1